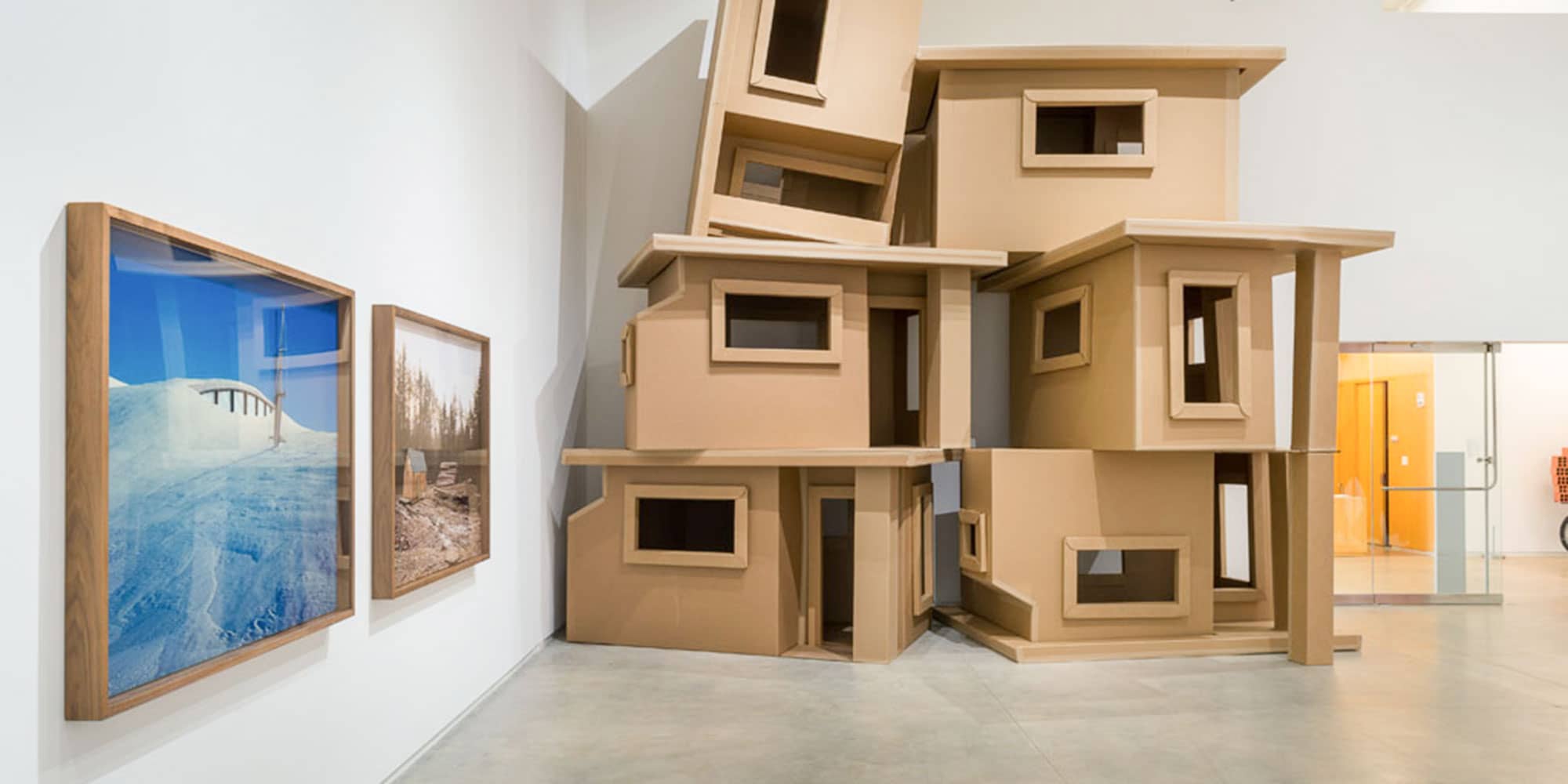 Buildering: Misbehaving the City is a traveling group exhibition exploring the unsanctioned use of architecture and the urban environment. Fusing the words “building” and “bouldering” (a type of rock climbing performed without harnesses or ropes), “buildering” serves as a metaphor for the creative misuse of built structures to circumvent their intended function. It suggests the possibility of alternative forms of engagement, both physical and psychological—or what ARCHITECT magazine columnist Aaron Betsky, reviewing Buildering when it premiered at the Contemporary Arts Center Cincinnati, called “parkour turned into art.”

While none of the artists in Buildering is a formal practitioner of parkour—the French term for a worldwide movement that turns the cityscape into a readymade obstacle course—their work embodies the spirit of its followers as they perform its expansive political capacity. Buildering is not about anarchism or overthrow, but about a romantic activism that re-asserts the strange, unwieldy, beautifully inefficient presence of the human body (back) into built space. In doing so, the artists in this exhibition find new signs of life in the aging shells of modernism and industry.

The title of the exhibition recalls a golden age of urban acrobatics emblemized by The Roof-Climbers Guide to Trinity (1899), anonymously published by the renowned Alpinist Geoffrey Winthrop Young when he was a college student. The movement reached its peak in the 1920s and 30s, but the fatal fall of an intrepid climber led the U.S. government to criminalize “urban assent.” The subculture was forced into the shadows until the 1980s, when a group of Parisian free-runners drew a straight line on a map and endeavored to go from point A to point B—directly—turning the French word for “the course” into the global phenomenon known as parkour.

With the aid of online video sharing, and underground websites, parkour has quickly spread worldwide: turning the cityscape into a readymade obstacle course. But like the sister subcultures of graffiti, skateboarding and hip hop, parkour’s popularity has also drawn the interest of corporations and led to commodification. What was born as a rebellious outdoor act without rules or reason is now bought and sold in private gyms, designer apparel, teacher certification courses, custom insurance policies, Hollywood movies, video games and contests sponsored by Red Bull. The outsider’s escape has been brought inside, but like the Trojan Horse before it, the explosive anatomy of buildering can storm the gates from the inside.

Wiebke Grösch and Frank Metzger survey an urban re-identification effort led by skateboarders, while Egle Budvytyte follows the trail of Dutch “jump children” as they re-map space through footsteps and leaps. The humble bikes and sheds of those forgotten in the fringes of developing countries become building blocks for Hector Zamora, Alison Moffett and Los Carpinteros to cobble together utopian proposals in a state of becoming.

Inside this nebulous domestic frontier, Bestué-Vives, Michel de Broin and Pia Rönicke transform household fixtures and popular archives into hallucinatory tapestries. Etienne Boulanger and Alex Hartley push this fantastic model of homesteading one step farther by imagining livable sanctuaries that are as impossible as they are inspiring.

Didier Faustino, Allard van Hoorn and Monika Sosnowska continue this sculptural manipulation of architectural anatomy, bending hard geometries (and harder ideologies) into a lyrical human language. The body is sculpted in an inverse way by Iman Issa and Carey Young, mirroring the city’s forms as they measure the effects of urban design in actions and limbs.

Few will travel passively in this expanded view of the city’s life as Antal Lakner, Shaun Gladwell and Sebastian Stumpf transform the constraining cabinets of elevators, subway cars and underground garages into theatrical sites of physical exercise. Touch, taste, and intimacy are similarly re-engaged by Ivan Argote, Lee Walton, and Kamila Szejnoch as they employ playful iconoclasm to pierce the social paranoia that pushes us apart.

Buildering: Misbehaving the City is organized by Steven Matijcio for the Contemporary Arts Center Cincinnati.
The presentation at Blaffer Art Museum is made possible, in part, by the Cecil Amelia Blaffer von Furstenberg Endowment for Exhibitions and Programs and the Houston Endowment Inc, with additional support from Major Exhibition Fund sponsors Leslie and Brad Bucher, William J. Hill and Jane Dale Owen. Additional support comes from the Anchorage Foundation, the City of Houston through the Houston Arts Alliance, the Jo and Jim Furr Exhibition Endowment at Blaffer Art Museum, and the George and Mary Josephine Hamman Foundation.