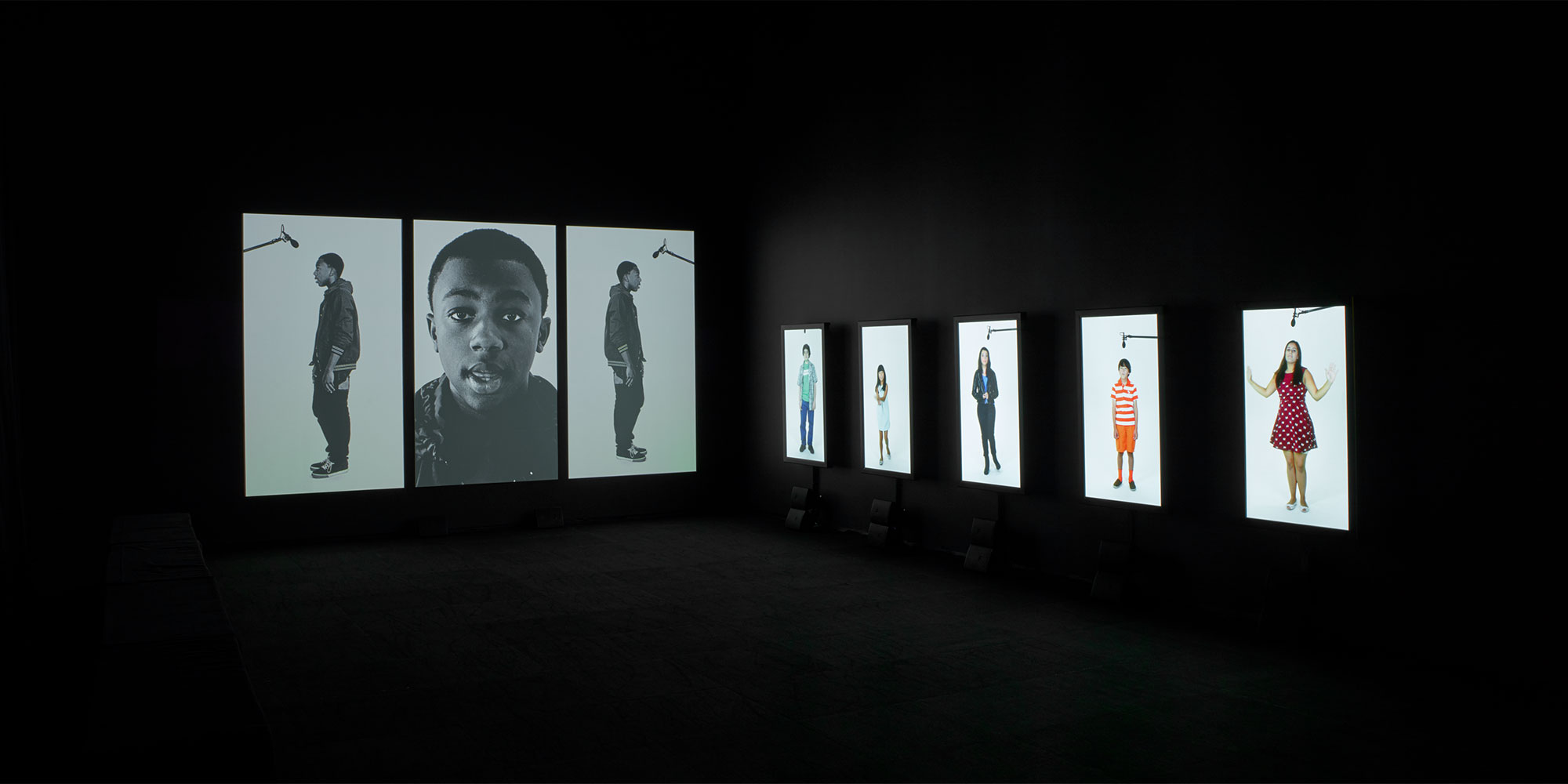 The Woods  is a trilogy of video installations by renowned South African artist Candice Breitz that takes a close look at the world of child performers and the performance of childhood in order to probe the dreams and promises embedded in mainstream cinema. Consistent with Breitz’s interest in the role that mimicry plays in the forging of selfhood and her ongoing analysis of the circular relationship between real life and reel life, The Woods traverses three continents to explore the rituals and conventions governing the on camera and off-camera personae of professional child actors, as well as adult actors who have become famous playing child roles. The trilogy brings together footage shot in Los Angeles, Mumbai and Lagos, seeking to observe and grasp the aspirational logic that is shared by Hollywood, Bollywood and Nollywood. Engaging actors and crews whose creative labor would ordinarily be subsumed into these three giant popular cinema industries, the three chapters of The Woods bring a behind the-scenes eye to industries that typically prefer to mask their inner workings.

As suggested by their titles–The Audition, The Rehearsal and The Interview–in each of the three installations making up The Woods, a particular show business ritual becomes the locus of meaning through which to more broadly reflect upon and decode the machinery of mainstream entertainment. The Woods marks the first time that Breitz has worked with professional actors–in the past, she has preferred to work with amateur casts. In the case of all three works in the trilogy, the actors were left to make their own choices when it came to self-presentation. All actors appear in clothes and accessories from their own wardrobes and were invited to liberally interpret their roles. The Woods is a new work that has been co-commissioned by ACMI (Melbourne) and the Peabody Essex Museum (Salem, Massachusetts) and celebrates its American Museum debut at Blaffer Art Museum.

The Woods was co-commissioned by the Peabody Essex Museum, Salem, Massachusetts and the Australian Centre for the Moving Image, Melbourne.
The presentation at Blaffer Art Museum is made possible, in part, by the Cecil Amelia Blaffer von Furstenberg Endowment for Exhibitions and Programs and the Houston Endowment Inc, with additional support from Major Exhibition Fund sponsors Leslie and Brad Bucher, William J. Hill and Jane Dale Owen. Additional support comes from the Anchorage Foundation, the City of Houston through the Houston Arts Alliance, the Jo and Jim Furr Exhibition Endowment at Blaffer Art Museum, and the George and Mary Josephine Hamman Foundation.
All Exhibitions