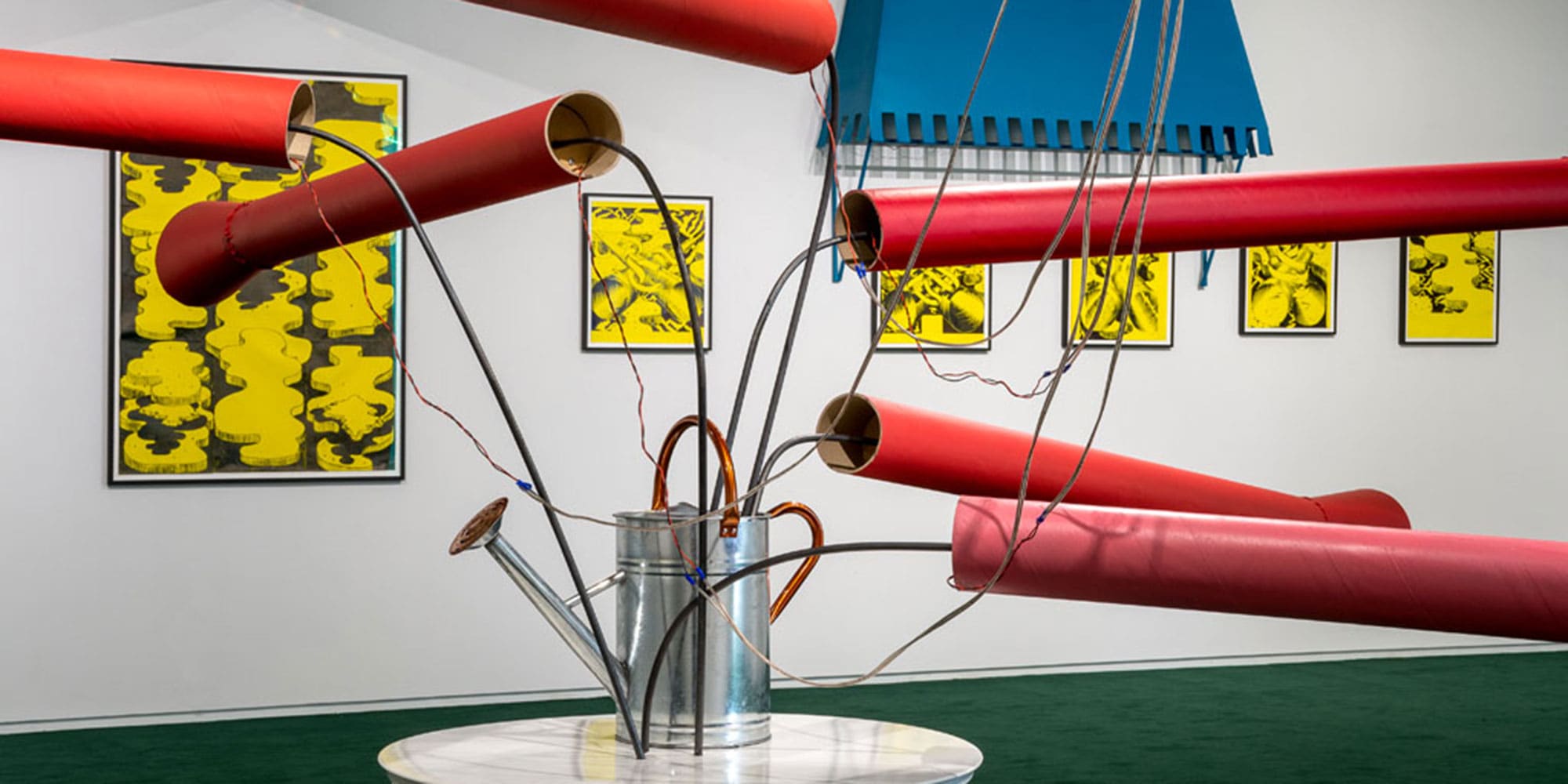 Early Awnings is a collaboration between German artist Henning Bohl and American artist Sergei Tcherepnin. Organized by Blaffer director and chief curator Claudia Schmuckli, the exhibition combines sculptures, drawings, and sound into an immersive installation that imbues objects and imagery with fantastic forms and symbols to serve as a multidimensional platform for storytelling.Grounded in feelings of malaise with the state of the world and invested in the creative exploration of vulnerability and fear, Bohl has created a series of fantasy illustrations entitled Kadath Fatal that draw inspiration from the imagery evoked in the literary genres of Cosmic Horror and Fantasy of Manners and the visual language of related graphic novels. The series borrows its title from American author H. P. Lovecraft’s novella The Dream Quest of Unknown Kadath (1926/27)—Kadath being a mythical peak where gods dwell “in the cold waste where no man treads.” However, unlike Lovecraft (1890-1937), whose illustrated novels locate fear in an inconceivable “other” descending to earth from outer space, Bohl brings those horrors closer to home. Turning cheese, cakes, ribbons and cornets—traditionally given to every German child on her first day of school—into monstrous presences, he conjures the subtle forms of terror and estrangment that await us in the everyday.

As striking for their overwhelmingly yellow palette as for their fantastical imagery, Bohl’s drawings invoke the signature style of British author and illustrator Aubrey Beardsely (1872-1898), who, along with American writer Henry Harland (1861-1905) co-edited The Yellow Book (1894-97), a leading British arts and literary periodical associated with Aestheticism and Decadence that helped define the last decade of the 19th century as “The Yellow Nineties.”

Complementing the drawings is a series of fabricated metal awnings installed along the perimeter of the gallery. They serve as both framing devices for the drawings as well as projection devices for the sound installation developed with Tcherepnin. Bohl considers awnings to be strange objects when contemplated on their own. Often beautiful but aesthetically alien to the facades they are attached to, they have no true architectural function other than marking and easing the transition from one domain into another. Transposed into a gallery setting, the awnings become symbolic markers of transition and literally set the stage for a play that brings the real (the physical installation in the gallery) and the imaginary (the realm evoked through drawings, text, and audio) into conversation.

A large sculpture of a withered bouquet of elongated, hornlike forms—resembling the empty, levitating cornucopia seen in many of the drawings—occupies the center of the room, complete with table and a bottomless watering pot. Set against the background of a moss green carpet, its “blooms” offer floral interpretations of the alphorn, a distinctive wooden horn instrument found in Europe’s alpine regions, while its built-in speakers project sound into the gallery.

Just as the drawings’ conical shapes formally recall the flower horns, the awnings literally echo the sounds coming from the sculpture, creating a musical dialogue in which the bouquet and the awnings are both actors and musicians. Written and recorded by Bohl and Tcherepnin, the sounds conflate gothic, baroque and folk elements edited into the repetitive pattern typical of soundtracks for video games. In a sonic play of call and response, the awnings intermittently come alive with a different sound, forming and asserting their own “voices” from different points in space before disappearing again into the background.