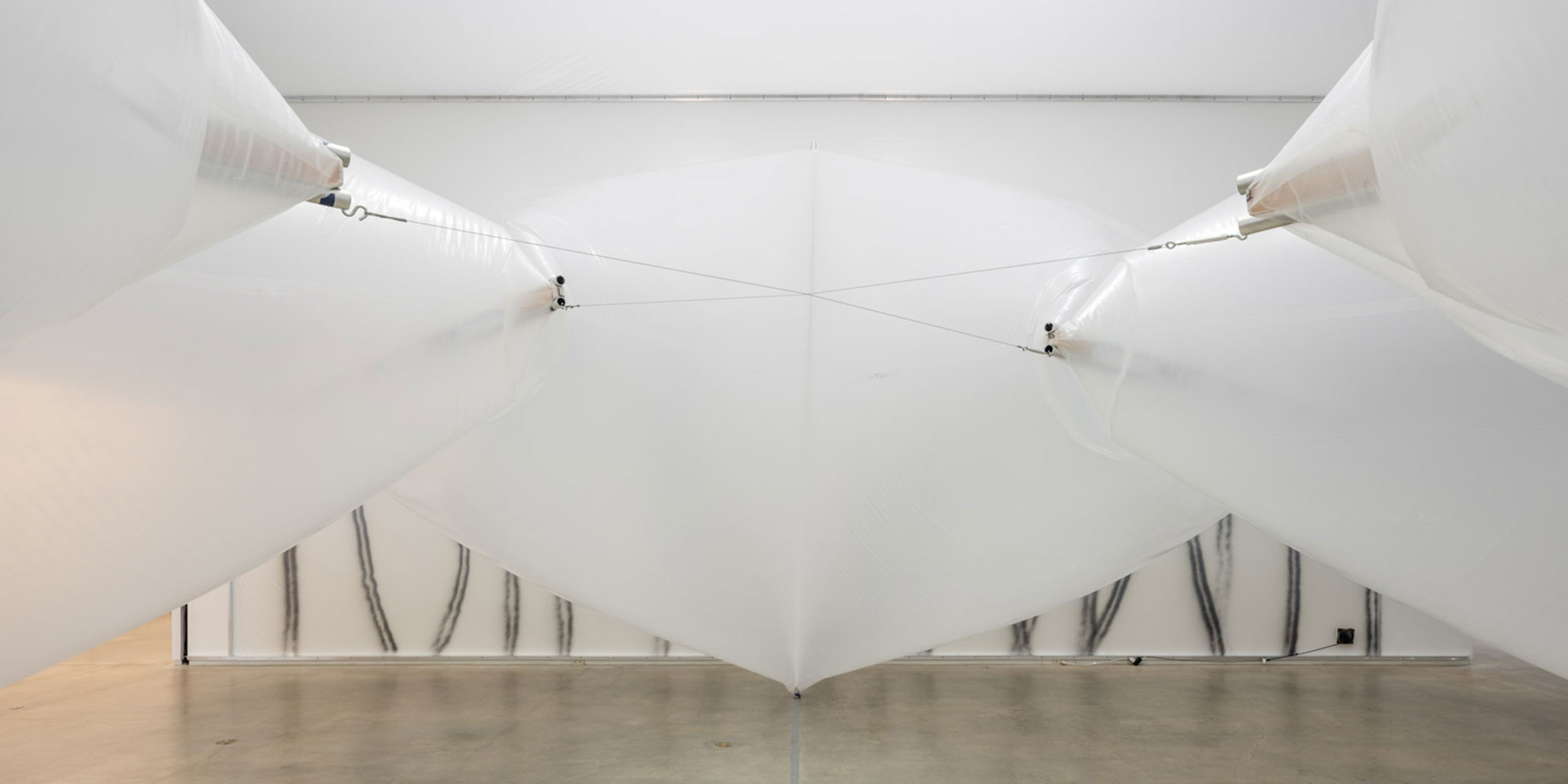 The New York-based artist Sergio Prego (b. 1969) creates unfamiliar perceptual and spatial situations in order to examine contemporary realms of experience. Prego conceives sculpture as a gesture that takes place on a specific situation. He takes inspiration from the performative or experiential turn of the 1960s — that is, the idea that meaning is made of and stems from the viewer’s embodied experience. His sculptural devices, including robotic arms, moving walls or inflatable membranes, transform through action the pre-existing spatial and discursive context of the institution so as to shape experiences beyond our conventional matrix of attitudes, habits and beliefs. “I have always been interested in inventing new modalities of apprehending the space or, even more, in inventing new spatial relations,” Prego says. “Instead of forcing the body to move in a particular way, I am interested in enabling the body to move in a different way. Sculptures and other devices are technologies elaborated in order to facilitate these type of movements.” Prego’s inquiry into the possibilities of bodies in space continues a lineage of thought established by disparate artists and thinkers, from science-fiction writers to radical architecture collectives to avant-garde dancers, that have envisioned new ideas of space and corporeality such as J.G. Ballard, Ant Farm or Trisha Brown.

Sergio Prego: Rose-colored Drift/To the Students extends the artist’s recent investigation of pneumatic structures — a type of membrane construction that is stabilized by the pressure of compressed air — that references the utopian and nomadic inflatable projects of the late 1960s. Alongside the site-specific pneumatic structures, the exhibition consists of sculptures, works on paper and videos. The title of the exhibition refers to Tatsumi Hijikata’s 1965 butoh performance Rose-colored Dance: À La Maison De M. Çiveçawa [to/from M. Shibusawa’s House]. Butoh is a Japanese avant-garde performance art invented by Hijikata in the late 1950s based on the plasticity of the human body that rebels against the accepted codes and roles. “The basic concept of my dance,” said Hijikata, “is rooted in the discovery that the human body may metamorphose into anything.” Under the influence of French writers such as Jean Genet or Antonin Artaud, the butoh stage often incorporates erotic and violent behaviors that call into question sexual signifiers and expose the underside of society. Like the majority of butoh performances, Hijikata’s Rose-colored Dance is imagistic rather than narrative, offering a combination of enigmatic scenes performed by androgynous dancers that expands on Hijikata’s interest with themes of homoeroticism and transvestitism.

The exhibition begins with a 14 feet high dome-like pneumatic structure made out of polyethylene and aluminum tubes. The volume of this translucent, inflatable piece takes over the monumental high ceiling gallery at Blaffer, almost compressing its surroundings. The inflatable structure is composed of eight modules of tetrahedrons, or triangular pyramids, arranged around a symmetrical axis. Prego has also covered the entire surface of each of the walls and the ceiling of the gallery with more membrane structures that bulge out of the wall. As a consequence, the central piece is encapsulated between the warped membranes attached to the walls and the ceiling. Embodying Prego’s idea of sculpture as action or “drift,” the pneumatic structures are supported by internal air pressure and, additionally, receive a continuous influx of air from various fans. The encapsulated tetrahedrons in polyethylene and aluminum — which recalls a combination of organism and machine, one of the pervasive tropes in science fiction — involve the visitor wandering around the galleries in a tactile and kinesthetic experience. Blurring the immediate surroundings, the installation transforms the viewer’s perception of the space as well as the familiar experience of his or her own body.

After the walk through the central piece, the exhibition continues with a second gallery covered with bulging translucent, pneumatic membranes that contains drawings and prints. Based primarily on field sketches of botanical specimens from the Museum of Natural History in New York, the line-based drawings depict plants and other organic structures that resemble body parts or sexual organs. Tracing a membrane-like contour that acts as a boundary between the figure and the ground, a limit between the interior and the exterior, Prego establishes a parallelism between the practice of drawing and the plasticity of life processes. The prints take a black-and-white version of the flag of the Basque Country — the official flag consists of a white cross over a green saltire, or “X,” on a red field — as the point of departure for a series of structural permutations. The gallery also includes on display numerous tubular sculptures with erotic connotations — some made of concrete and others in grey resin. Prego’s drawings and sculptures depart from the methodologies of Minimal Art such as reductionism, repetition and permutation, introducing a cinematic sense of motion into the elements — as if the sculptures were frame stills from a sequence or film.

A selection of Prego’s videos is on view in the Salieri Studio on the second floor. The selection spans nearly twenty years and includes one of his first videos, Tetsuo Bound to Fail (1998). The video makes reference to a homonym character of AKIRA, a 1980s cyberpunk Japanese manga series written by Katsuhiro Otomo. Set in a post-apocalyptic Tokyo, AKIRA’s Tetsuo is a teenager unable to control his own psychic powers and whose body morphs into a monstrous, cybernetic organism. Set in an abandoned industrial landscape, Prego’s video depicts a series of performances such as jumps, liquid spills and explosions. Building on Muybridge’s tracking shot method, Prego uses 40 cameras placed in a circle in order to capture his subjects from multiple perspectives; the photos are then transferred to video and edited into sequences that suggest a consecutive movement. Prego’s Tetsuo levitates upright over the floor, engages in a dance with a morphing airborne blob of yellow liquid and creates a solid, uncanny mushroom cloud.

Sergio Prego (b. 1969 San Sebastian, Spain) lives and work in Brooklyn, NY. He holds a BFA from the University of the Basque Country and attended Arteleku, an experimental art center in San Sebastian. From 1996 to 2002 Prego worked with Vito Acconci in Acconci Studio, an interdisciplinary architecture and landscape design team. He has exhibited extensively in the United States and abroad including the Singapore Biennale 2008, the Moscow Biennial 2009, the Dojima River Biennale 2009 at Osaka, CA2M, the Guggenheim Museum Bilbao, MUSAC in Leon, Galería Soledad Lorenzo in Madrid, Alfonso Artiaco Gallery in Naples, Lehmann Maupin Gallery, Lombard Freid Gallery, TBA21 in Vienna, Palazzo Delle Papesse in Siena, The Museum of Contemporary Art in Denver, and MoMA PS1 in New York.