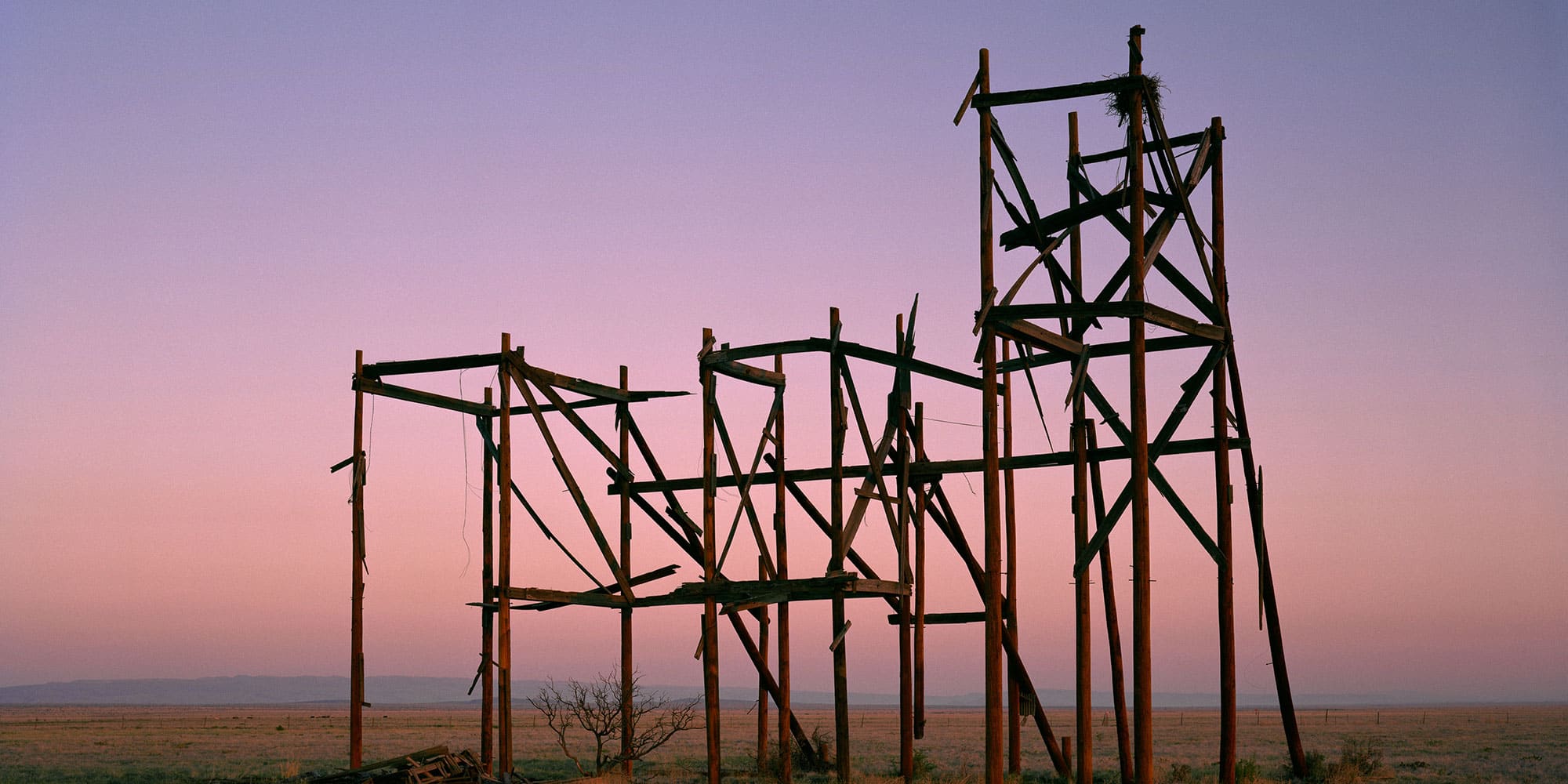 Sound Speed Marker is an internationally touring exhibition showcasing a trilogy of video installations, related photographs and an outdoor sculpture by the renowned Swiss-American artist duo, Teresa Hubbard and Alexander Birchler. Organized by Ballroom Marfa, where the exhibition premiered in 2014 before traveling to the Irish Museum of Modern Art in Dublin, Sound Speed Marker is on view at Blaffer May 29 through Sept. 5.

In Sound Speed Marker, the Texas towns and landscapes of Paris, Sierra Blanca and Ryan—each cinematically defined by their fleeting experiences as actual or ostensible film locations—take center stage as Hubbard / Birchler and their crew pay close attention to these places and the people who live there.

Grand Paris Texas (2009), the first work in the trilogy, revolves around the Grand, an abandoned movie theater in Paris, Texas, whose rise and fall anchor residents’ reflections on their personal histories with cinema, their memories of the Grand and their connections to the 1984 Wim Wenders film that borrowed the town’s name as its title.

In Wenders’ film, Paris, Texas represents an ideal for a life yet to be realized, and thus the town never appears in the actual film—to the consternation and bemusement of the many residents who saw it at the Grand in 1984 or rented it from a local video store up until 2007, when Hubbard / Birchler bought the only available VHS copy after learning that the ending had been recorded over. Compounding the sad irony of denying residents who rented Paris, Texas the satisfaction of knowing how it ends, the recording turns out to be King Baggot’s silent Western classic Tumbleweeds (1925).

Even though the filmmakers had not yet stumbled upon the subject of their next film, Movie Mountain (Méliès) (2011), the discovery of Tumbleweeds at the end of Grand Paris Texas has a prescient quality. Hubbard / Birchler’s research in and around Sierra Blanca after they first followed rumors about a place nearby called Movie Mountain sent them straight back to the beginning of the twentieth century and the era of the silent Western, which was at its peak when Movie Mountain became the anonymous hero of Sierra Blanca and the stuff of circuitous oral histories.

Searching for the origin of the mountain’s name, the artists embarked on a journey traversing the landscape of early silent-era film production, uncovering a peculiar possible relationship between Movie Mountain and Gaston Méliès, the lesser known brother and business partner of the famous filmmaker George Méliès. Filmed on location over the course of one year, Movie Mountain (Méliès) generates several fractured narrative strands that interweave agency and memory. Following a group of horseback riders to Movie Mountain, the project features local residents whose relatives performed in a long-forgotten silent picture, as well as a script-writing cowboy who has dreamed of being in movies since hearing of the mountain as a child.

In Giant (2014), the final work in the trilogy, Hubbard / Birchler break with the interview format of Grand Paris Texas and Movie Mountain (Méliès). Taking its title from the 1956 classic featuring Elizabeth Taylor, Rock Hudson, and James Dean, Giant jumps back and forth between two narratives: the audio-visual exploration of the ruin and terrain of Reata, the iconic home of the epic film’s Benedict family, and a fictional mise-en-scène of a 1950s Burbank clerical office where a woman types out stenographic notes on her Underwood. Her insistent typing is of the 1955 contract between Warner Bros. and the Fort Davis property owner whose land, horses and cattle became the backdrop for the legendary movie.

The document’s language thumps and threads its way through the film as letter after letter hits the ribbon. The contract both sets the condition for the projection of the typist’s imagination as she pauses to gaze out the window and serves as a contrasting foil of the limitlessness of the landscape whose use it aims to contain. By now nearly 60 years old, the Reata set’s skeleton has become part of a natural cycle in which the life and death of birds and bugs are as integral those of the structure itself. With the set having become part of nature, it is the West Texas landscape that emerges as the true protagonist.

The trilogy addresses all the known clichés associated with Texas: its industries of cattle, oil and space, its heroes of cowboys, wildcatters and astronauts, its vast land and skies and extreme weather. But it removes them from their isolated existence of singular ideas and concepts and inflects them with real times, places and people who collectively deny their simple perpetuation. More broadly, the site, subject and mystique of Texas and its associated cinematic imagery serve as a platform for reflection on filmmaking itself.

Missing Truffaut (2014), a rare sculptural work that will be installed in Blaffer’s courtyard, replicates a quotidian wooden lamppost and the type of handmade sign commonly adhered to its surface announcing the loss of a pet—in this case, a cat named after one of the French New Wave’s most prolific and critically acclaimed filmmakers. “Captured in Missing Truffaut’s simple gesture is the range of effects the cinema has inscribed in our culture, from the enormous innovations of film’s avant-garde in the 1950s and 1960s to the appropriation of the genre’s noteworthy references into totally unrelated aspects of our daily lives,” writes catalog contributor Anne Ellgood, senior curator at the Hammer Museum at UCLA.

This program has been made possible by the generous support of Andy Warhol Foundation for the Visual Arts; L & M Charitable Foundation, Inc.; National Endowment for the Arts; Texas Commission on the Arts; the Aargauer Kuratorium, Switzerland; The Brown Foundation, Inc., Houston; and Pro Helvetia, Swiss Arts Council. The presentation of Sound Speed Marker at Blaffer Art Museum is made possible, in part, by Jereann and Holland Chaney, the Cecil Amelia Blaffer von Furstenberg Endowment for Exhibitions and Programs and the Houston Endowment, In. Additional support comes from the Blaffer Art Museum Major Exhibition Fund, the City of Houston through the Houston Arts Alliance, the Jo and Jim Furr Exhibition Endowment at Blaffer Art Museum, and the George and Mary Josephine Hamman Foundation. Additional support provided by the Bill & Bettye Nowlin Research Fellowship in Photography at the University of Texas at Austin. 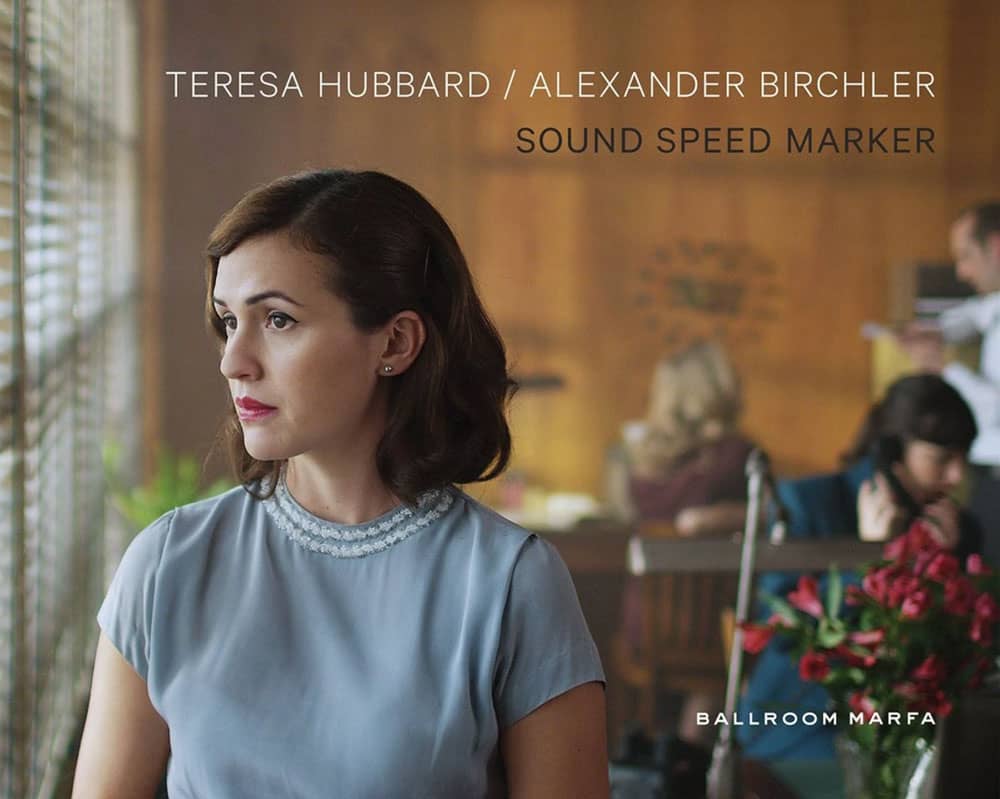