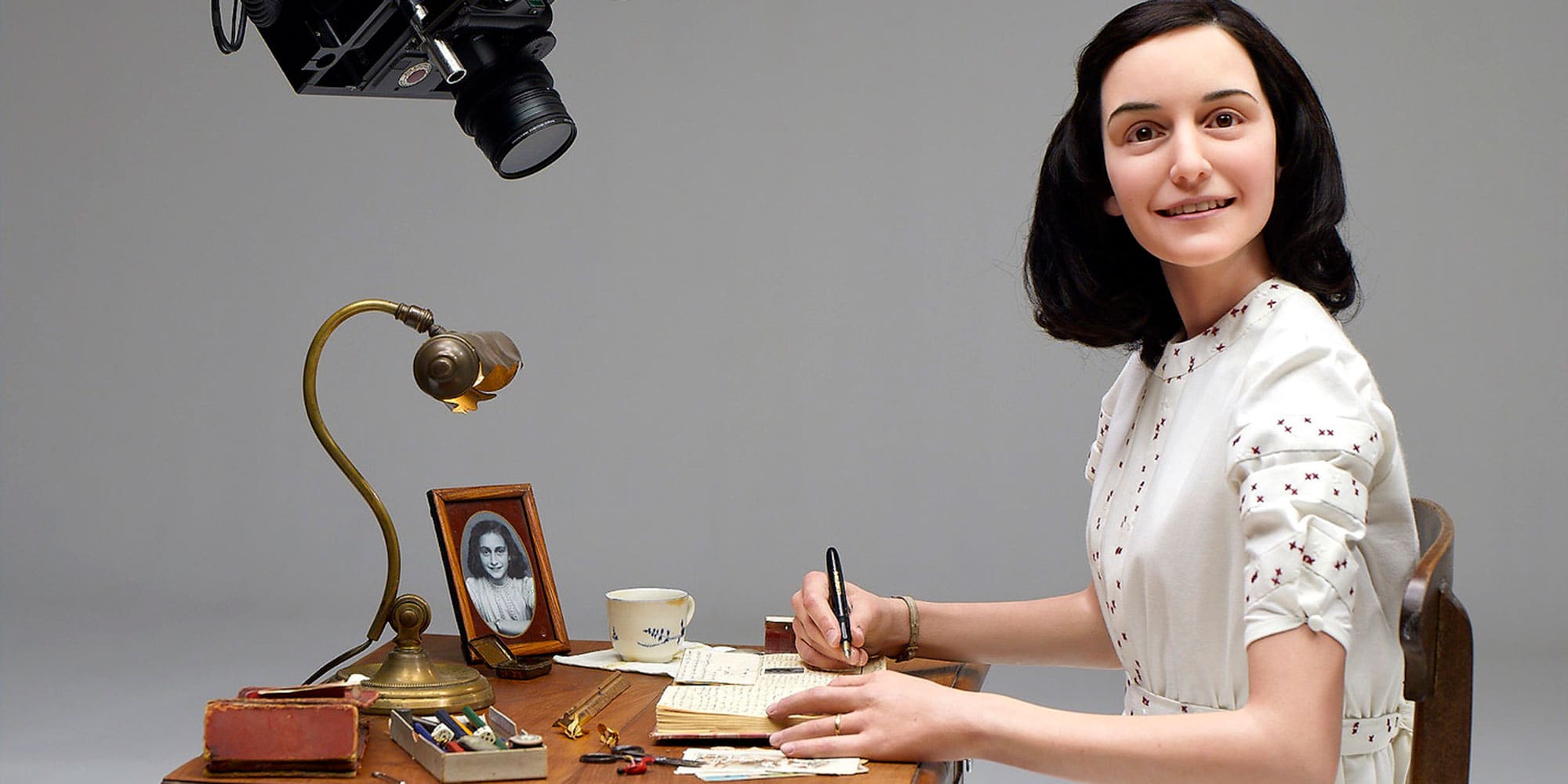 British-Japanese artist Simon Fujiwara (b. 1982) regularly investigates themes of popular desire such as tourist attractions, famous icons, celebrities, “edutainment,” and mass media. In this seductive, if no less fraught arena, his work reveals the paradox of our simultaneous quest for fantasy and authenticity in the culture we consume. Hope House is a continuing exhibition built on several years of close study into the cultural legacy of Anne Frank: a young Jewish girl who was persecuted and murdered by the Nazi regime, and who became famous posthumously as a published author for the diary she wrote whilst in hiding during World War II. In 2017, Fujiwara visited the Anne Frank House, now a museum in Amsterdam, where he bought a ‘build-your-own’ scale model of the house as well as a ‘write your own’ blank diary referencing Anne Frank’s original. Both are interactive museum products authored by the museum and sold in the museum shop.

Puzzled and discomforted by encountering these products that are rooted in the tragic, yet inspiring history of Anne Frank, Fujiwara entered a prolonged investigation into the long, complex history of representations of the famous diarist. In the process, he has uncovered numerous movies, plays, products, reconstructions of the house, controversies and messages of hope that have collectively formed a sprawling industry around a young girl, and aided her ascension into a global icon. Fujiwara exhibits the results of his findings so that audiences can explore the challenging, but revealing questions that arise when the “authenticity” of real lives are fed into our techno-capitalist entertainment culture today.

Since 2017, Fujiwara has been rebuilding replicas of the Anne Frank House as exhibition architecture to both contain and present his works and research. Inspired by the fact that much of the original Anne Frank house has undergone reconstruction, leaving only a few authentic traces of Frank, he began replicating not the original building but the model he bought at the museum store—enlarging it to a full-scale immersive installation. The exhibition has travelled to several locations, first shown in Israel at the Dvir Gallery in 2017, before expanding across four floors of the Kunsthaus Bregenz in Austria in 2018. Titled Hope House, the itinerant, kit-part exhibition modules of the house set the stage for a ‘museum within a museum,’ where Fujiwara shows artifacts related to the world surrounding Anne Frank, as well as other contemporary objects and products he has collected over recent years. Together these objects create a portrait of the ways in which capitalism, philanthropy, politics, and history collide in unusual and often disturbing ways. Fujiwara is particularly interested in the notion of “goodness” as an attribute that is associated with the act of visiting the Anne Frank House, and what happens when hopeful ideologies meet the hard demands of capitalism, image, tourism, and consumer culture.

At the Blaffer Art Museum, Fujiwara presents a reconstruction of part of the hiding place in which Anne Frank lived, known as the “Secret Annex.” Expanding on his concept of a ‘museum within a museum’ that is regularly updated, Fujiwara presents a new collection of objects that point to the ways capitalism and image culture have been absorbed into all aspects of our lives.

Through this new set of works, Fujiwara shines light on the dangers within each society’s construct of their ‘positive’ self-image and narratives that are evident in even the most seemingly insignificant objects. For the artist, a broom used to clean the streets after the London riots of 2011, a tableware set from a high end charity restaurant within UK prisons that employ their inmates, boutique presentational items sold to help refugees, and even the make-up of German Chancellor Angela Merkel embody underlying structural narratives of gender, wealth, and racial inequality.

Skewing and re-shaping the Blaffer Art Museum architecture, Hope House orchestrates a labyrinth experience that weaves the audience into the world behind these works, creating both an exhibition and a ‘making of’ story. The exhibition culminates in Likeness, a custom-made wax figure of Anne Frank that the artist made after encountering several wax recreations of the girl at various tourist attractions. Physically distanced from the audience by a barrier, the hyperreal figure is brought into uncanny proximity to us through the use of a robotic camera. With this high-end technology developed for the advertising industry, visitors can finally experience a highly intimate encounter with Anne Frank—not as the human she was, but as the image we have come to know.

We extend sincere gratitude to the Anne Frank House Museum and Holocaust Museum Houston for their partnership and counsel in this presentation. Special thanks also go to Sallie Morian and Michael Clark, Jo Dee and Cliff Wright, as well as Esther Schipper and her Gallery in Berlin for their visionary support of Hope House.

Lead annual support for exhibitions and programming at the Blaffer Art Museum is provided by The Andy Warhol Foundation for the Visual Arts and The Farrell Family Foundation. 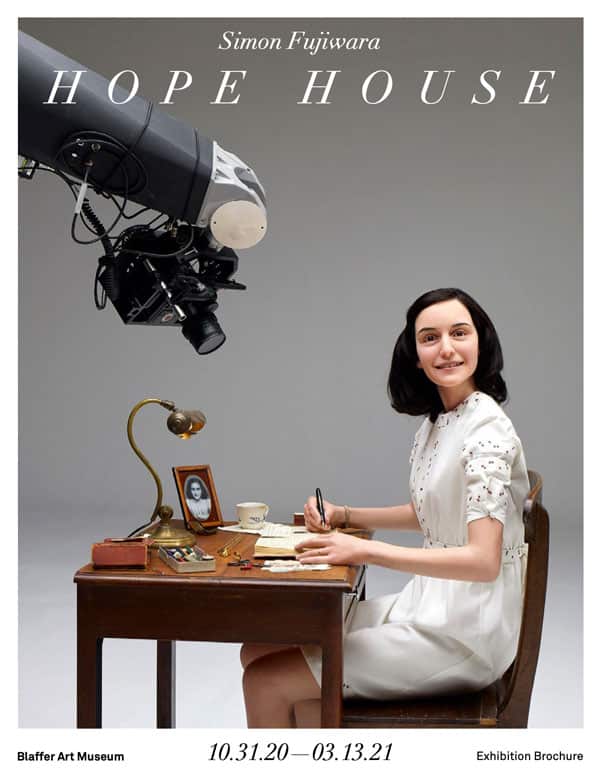 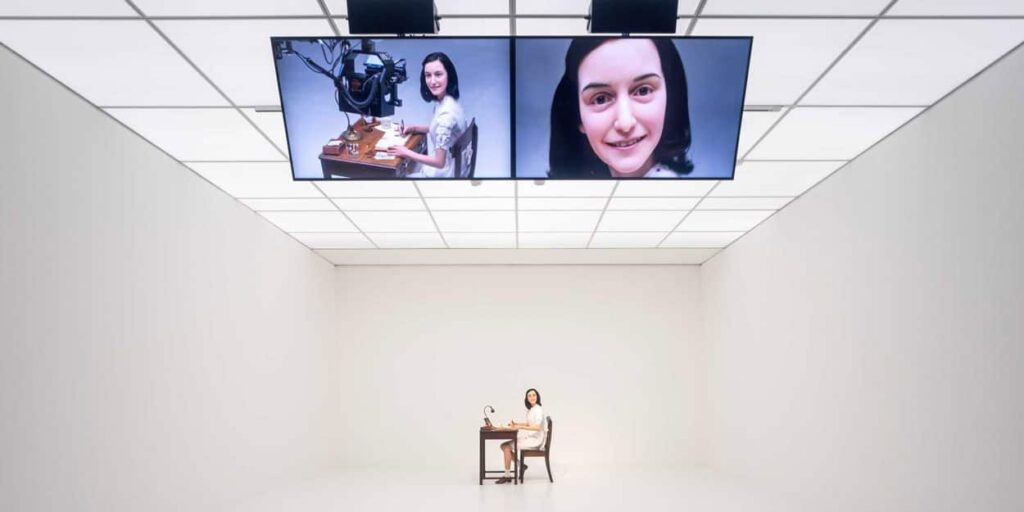